The National Transportation Safety Board traveled to the scene of this accident.

This is preliminary information, subject to change, and may contain errors. Any errors in this report will be corrected when the final report has been completed. NTSB investigators either traveled in support of this investigation or conducted a significant amount of investigative work without any travel, and used data obtained from various sources to prepare this aircraft accident report.

On July 14, 2017, at 0930 Pacific daylight time, an experimental amateur-built Jansen, Pazmany PL-2, N186EJ, impacted the ground after experiencing a total loss of engine power during the initial climb from the San Gabriel Valley Airport (EMT), El Monte, California. The airplane was registered to Progenitech LLC and operated by the pilot as a 14 Code of Federal Regulations Part 91 personal flight. The private pilot was fatally injured, and the airplane sustained substantial damage. Visual meteorological conditions prevailed and no flight plan had been filed.

A witness reported that he observed the airplane taxi and takeoff a few minutes after the pilot had arrived at the airport. Other witnesses reported they watched the airplane takeoff; when it was about 50-75 feet above the runway, the engine sputtered and lost complete power. The airplane continued straight for a brief time, and to some, it appeared as if the airplane was climbing. The airplane made a steep left turn; during which, the airplane's nose dropped to near vertical and it descended to the ground.

The airplane has been recovered to a secure location for further examination.

Those who may have information that might be relevant to the National Transportation Safety Board investigation may contact them by email eyewitnessreport@ntsb.gov, and any friends and family who want to contact investigators about the accident should email assistance@ntsb.gov. 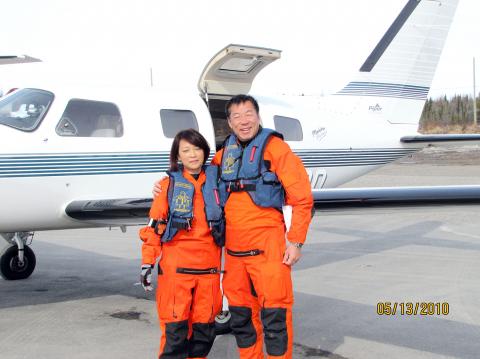 The first Taiwanese pilot to circumnavigate the globe in a single-engine airplane died on Friday after the small plane he was flying crashed at San Gabriel Valley Airport in El Monte, California, the Ministry of Foreign Affairs said yesterday.

Jeffrey Ying, 63, was the first pilot from the US’ Chinese-speaking community to fly around the world in a single-engine airplane in July 2010.

Ying, a Taiwanese expatriate, had been running a fleet of planes with his friends in the US, who also flew the aircraft annually for Double Ten National Day celebration events at Monterey Park in California since 2011, Chinese American Pilots and Aircraft Owners Association director James Bu said.

The crashed plane had a Republic of China national emblem painted on the fuselage and was similar to a decommissioned air force trainer aircraft.

The cause of the crash was likely related to mechanical problems, the ministry said, adding that it would provide Ying’s family whatever assistance it needed.

The Los Angeles Times said that Ying’s Pazmany PL-2 took off at about 9:30am, but crashed shortly afterward.

Video broadcast by local TV news outlets from the scene at a corner of the airport showed the aircraft’s nose flattened at an angle and its left wing crumpled.

Ying, who had more than 2,000 hours of flight experience, acquired the PL-2 many years ago, Bu said.

Ying remodeled the plane to look like a Taiwanese trainer and painted the code 5858 himself, Bu said. 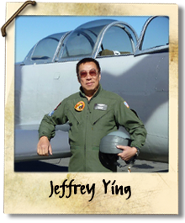 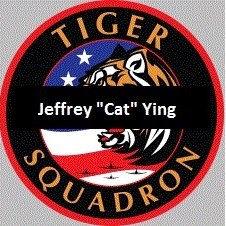 Today, Tiger Squadron mourns the loss of one of our fellow team members, Jeffrey "Cat" Ying, who perished in a tragic accident while flying from his home airport of KEMT. He will be remembered fondly for the kind and generous man that he was and will be honored by those of us he left behind in the Tiger Squadron. 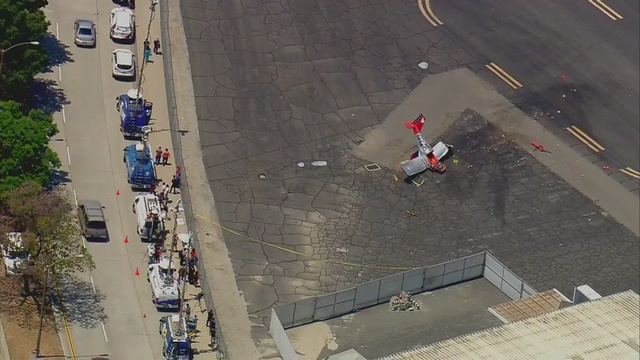 "Just all of the sudden it did a quick jerk and nosedived straight down in the ground and spun around a little bit." said Kevin Ward, who was working nearby. He described the terrifying moment a single engine experimental plane fell from the sky shortly after takeoff.

"It seemed like he started turning early...towards us...and I don't know it looked like something broke on his steering." said Ward.

He called 9-1-1 and took a cell phone video of the moments before paramedics arrived.

The deadly crash happened around 9:30 am. National Transportation Safety Board investigators say witnesses heard the engine quit right before the crash. 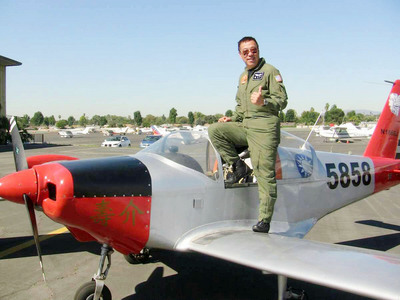 The pilot died on impact. Authorities identified him as 63 year-old Jeffrey Ying, a business owner and experienced pilot who was also a member of the Elite Tiger Squadron Flying Team. The squadron performs at airshows and special events around the country.

Members posted a message on their Facebook page in remembrance of Ying calling him a kind and generous man.

According to his Tiger Squadron bio, Ying has logged more than 2,000 flying hours. He was also the first person of Chinese descent to fly around world in a single engine plane. Investigators will be looking into why Ying appeared to turn around when his plane apparently had mechanical issues.

"Pilots are taught that if they have a problem they need to land straight ahead...turning around can bleed off too much air speed and it increases your stall speed." said Patrick Jones,Air Safety Investigator with the NTSB.

According to the Federal Aviation Administration, the plane was a "homebuilt, single-engine Pazmany PL-2" that crashed on airport property while departing from Runway 19 around 9:30 a.m. The pilot was the only person
on board, according to the FAA.

The airport was formerly known as El Monte Airport. 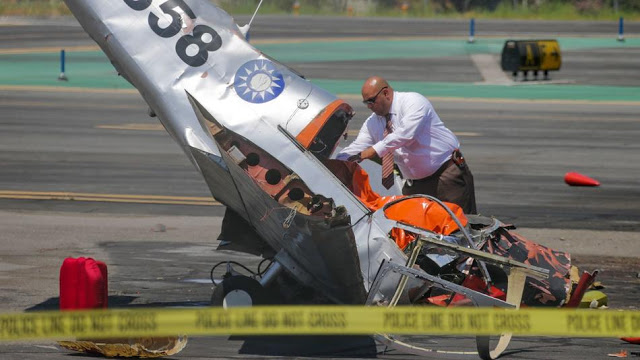 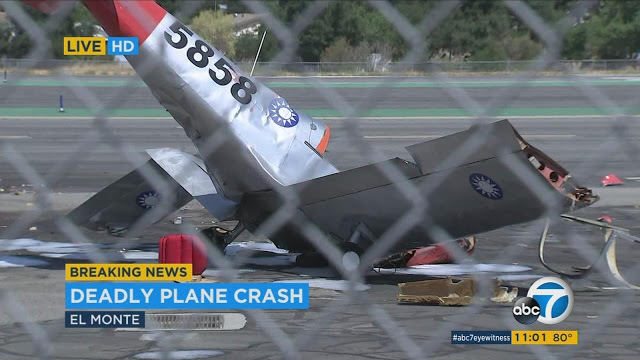 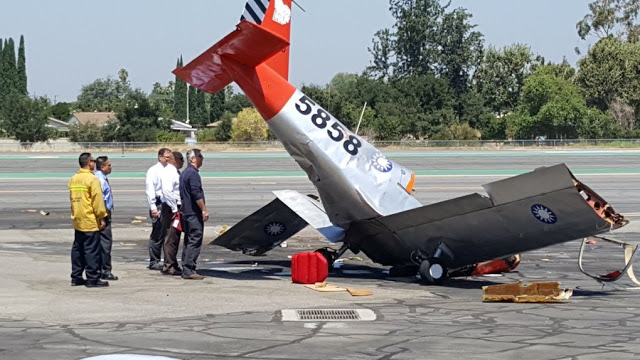 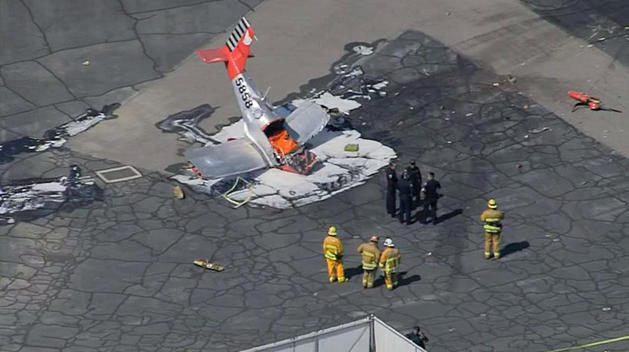 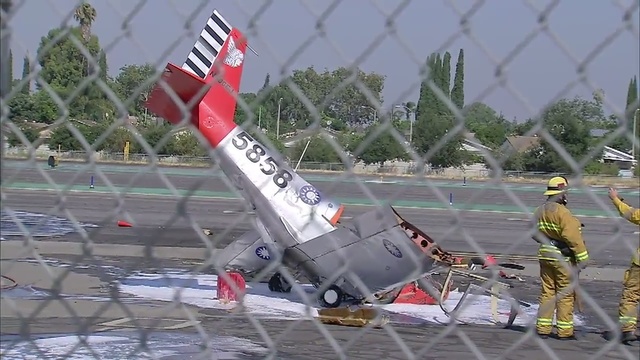 The deceased is Jeffrey Ying, 63, the first pilot from the Chinese-speaking community to fly across the world on a single-engine airplane in July 2010.

Ying, a Taiwanese expat, had been running a fleet of planes with his friends in the U.S., who also had flown the aircraft annually to perform in Taiwan's National Day celebration events at Monterey Park since 2011, according to James Bu, head of the Chinese American Pilots and Aircraft Owners Assoc.

The crashed plane had a Republic of China (Taiwan) national emblem painted on the fuselage, and was similar to a decommissioned trainer of the country’s air force.

The cause of the crash was likely related to mechanical problems, the ministry said, adding that it will provide whatever assistance necessary for the victim’s family.

According to the Los Angeles Times, the single-engine Pazmany PL-2 began to depart from runway 19 at San Gabriel Valley Airport about 9:30 a.m. local time, but crashed shortly afterwards.

Video broadcast by local TV news outlets from the scene at a corner of the airport showed the aircraft’s nose flattened at an angle and its left wing crumpled.

Ying, who had more than 2,000 hours of flight experience, acquired the PL-2 which was similar to the model used in Taiwan’s air force, many years ago, Bu said.

Ying remodeled the plane to give it the looks of the Taiwanese trainer and painted its code 5858 on it by himself, Bu said.

In 2010, it took Ying and his wife Renee Chen 82 days to fly 26,000 miles across 26 countries in the world. Ying became the 166th person in history to accomplish that endeavor, according to Chinese-language newspaper United Daily News.

Ying had loved the idea of flying from an early age and had even built his own turboprop while he was still in vocational school in 1978, the newspaper said.

I/O Controls has created this website to honor the memory of Jeffrey Ying — founder, leader, and treasured friend.